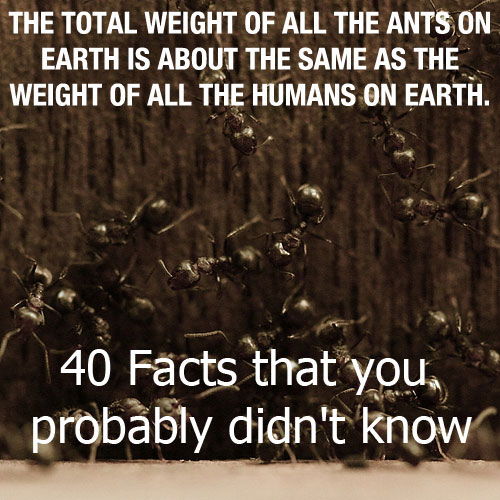 Hello guys today I will give you 40 facts that you might not have heard before. I found these facts on the internet will just surfing around. I hope you will enjoy. If you have any more facts that you want to add drop in a comment.

The world’s quietest room is – 9 decibel, quiet enough to hear your own blood flowing

You can’t smell while you’re sleeping

In 1903 the Wright brothers flew for 59 seconds. 38 years later the Japanese bombed Pearl Harbor. 28 years after that, we landed on the moon

Half of all humans who have ever lived, died from malaria

Alcohol is considered a performance-enhancing drug in competitive shooting competitions

If you shuffle a deck of cards, chances are that the new order of playing cards has never existed before

You replace every particle in your body every seven years. You are literally not the same person you were 7 years ago

A tree is the opposite of your lungs. Physically and functionally

Mayonnaise is made from oil and eggs

The sun is 400x further from the earth than the moon, but the moon is 400x smaller than the sun

If there was no space between any of its atoms, Earth would be the size of a baseball

Turtles can breathe out of their butts

It takes a photon, on average, 200,000 years to travel from the core of the Sun to the surface, then just a little over 8 minutes from the Sun’s surface to your eyeball

Lighters were invented before matches

If a man never cut his beard, by the time he dies it would be 30 feet long

The USA is an older country than Germany

A Mosquito has 47 teeth

Most Diamonds are at least 3 years old

Grasshoppers have ears on their stomach

95% of the cells in the human body are bacteria

Bats are the only mammals that have wings

A fresh egg will sink in water

August has the highest percentage of birth

7 Things that May Go Wrong When Planning a Wedding

4 Steps to Start Saving for a House

How to Improve House Air Quality with Air Conditioner

How to Make a Gift Box for Birthday?

How a Bidet Benefits Both Us and the Environment