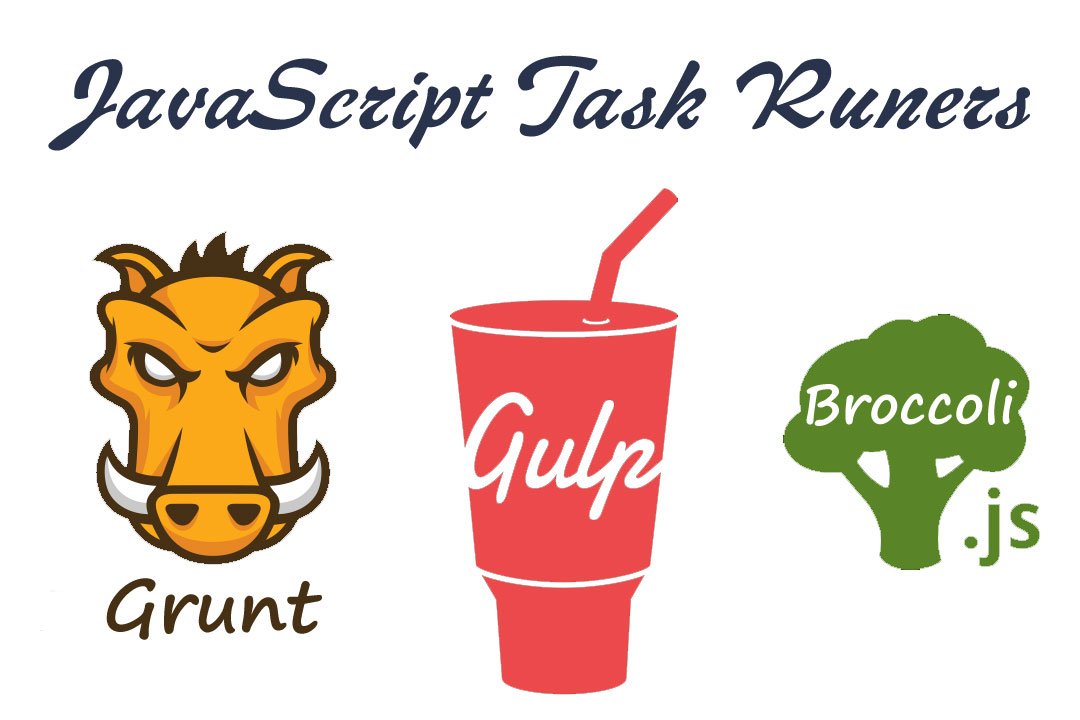 Hello Guys today I will tell what are JavaScript Runners and how it will help you build your single page web application.

In this post we will see 4 JavaScript Task runners Grunt, Cake, Gulp and Broccoli.

One of the most used task runner is Grunt. It was created by Ben Alman in Node.js. Grunt is a JavaScript task runner, a tool used to automatically perform frequently used tasks such as minification, compilation, unit testing, linting, etc. It uses a command-line interface to run custom tasks defined in Gruntfile file.

Plugins are based on configuration via a JavaScript object. Unless you want to write your own plugin, you mostly write no code logic. The community is very active and you will find a lot of resources about Grunt.

Grunt has tons of plugins, everyday a new plugin is developed. You can see all the plugin list here.

Cake is only supported with coffeescript. It is exactly opposite to grunt. Cake is useful in small task in a very straightforward way. It also requires Cakefile to describe the task. There is no plugin system like grunt so you must write all the logic yourself.

In short, it is perfect for small task and does not require any dependencies if you work with coffeeScript. But if you use this for large task it will make you life difficult.

I am not sure it is used much now-a-days as it can’t handle heavy task.

It works same as grunt, but makes things little easier by replying on code logic based on pipes. The idea is that your code is a list of files that require a series of operation to be applied in a gulpfile.js file. Each operation is piped to next one.

It has also plenty of plugin like grunt, but the code is flexible and less code is required compared to grunt. On the counterpart it doesn’t provide clean configuration file and, for the moment, the community is less active.

Broccoli follows gulp principle, tasks based on code logic and plugin system for helpers. It uses filters instead of pipe that you can apply to tree of file. You need to select folder and then apply the functions of plugin to it in a broccoli.js file. Broccoli relies more on the command line for parameters.

It is not completely stable, but it produces the most concise code of all. But its community is less active compared to grunt and gulp.

So if you ask me which is the best task runner, I would say broccoli is best, but the only reason you cannot use it widely is only because it is not stable. So grunt is the better choice, because grunt is completely stable and there are lots of plugin available fo you to use. But if you want a smaller task to be handled use gulp.

What is Payment Gateways and how it works 2019

How to Use SEO in Your Digital Marketing Strategy